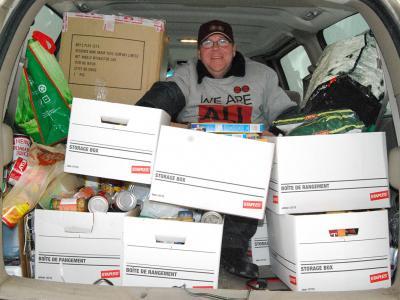 “Our members collected a lot of food going door-to-door in Nepean and Barrhaven. Tonight, PSAC members will be out at several major grocery stores on Greenbank and Strandherd roads to encourage shoppers to pick up a little bit extra to donate to the food bank during the holiday season,” said David Lanthier of the PSAC’s Ottawa Area Council.

“We know all communities in Ottawa are in need at this time of year. When one person in our community is affected - we’re all affected,” said Larry Rousseau, PSAC Regional Executive Vice-President for the National Capital Region, who took part in the drive.

Members of the public can drop off non-perishable goods to PSAC offices in the NCR area - locations on Gilmour Street until January 2nd, 2013, and at Holland Cross near Tunney’s Pasture until December 23.